GUI StudioMDL 2.x is the follow up of the original GUI StudioMDL for Half-Life re-written to work with the new Source SDK. It provides access to all the same functions and parameters as the command line based Source StudioMDL compiler, but through a simple Windows based graphical user interface. 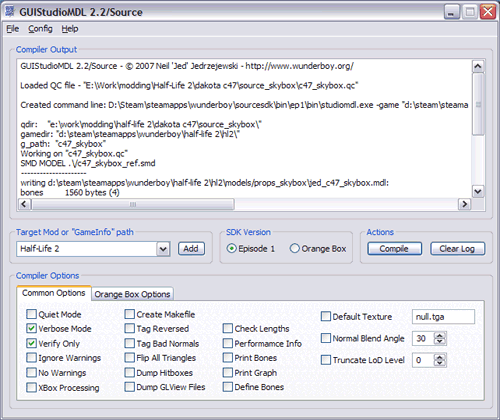 So why use it?

Well I cant force anyone to use it but it does save some of the hassle of starting a DOS window and typing long pathnames in! It does however give you the following:

Place GUIStudioMDL.exe in a location of your choosing, although I would recommend placing it in your Source SDK “bin” folder along with the rest of the SDK tools.

If you create a desktop short-cut to GUI StudioMDL you can drag QC files onto it and they will be automatically opened and loaded.

The first time you run GUIStudioMDL you will get a message telling you that your SDK Tool Paths aren’t yet set. What you need to do is tell it where the studiomdl.exe is located for EP1 based games and Orange Box based games. These are usually located in the following folders:

Use the “Config” menu to set these two paths.

If your game/mod is not included in the drop-down list, this is because it isnt in the SDK’s game config file. You can do a quick-fix by using the “Add” button to browse to your game/mod folder and select the GameInfo.txt. For a more premanent solution, run the vconfig.exe program from within the SDK “bin” folder – this will add your game/mod to the SDK game config so it will be available to all SDK apps.

To compile a model, load its QC file, select the game/mod and the SDK version you are compiling the model for and then set any options you want to pass to the compiler. Onces your ready, press the “Compile” button and off you go – its as easy as that!

You are allowed to distribute software on this page freely as long as it is not for profit and this documentation is intact and unmodified. If you do decide to distribute it, please let me know as I’d like to know who’s using it.

This software is experimental. I, the author, assume no responsibility whatsoever for its use by other parties, and makes no guarantees, expressed or implied, about its quality, reliability, or any other characteristic.