Tools and utilities for the Valve GoldSrc SDK, Half-Life and Half-Life based games

The following is a small application I wrote to help with content creation for Half-Life 1 and mods based on it. This includes Day of Defeat, Counterstrike, Opposing Force, BlueShift, etc.

Having used computers for a long time, using a command line tool isn’t and issue for me, however I noticed more and more people getting into Half-Life model making but coming unstuck when trying to use the model compiler. To this end I’ve written a small Win32 Gui front end to the compiler called, oddly enough, GUI StudioMDL. It provides access to all the same functions and parameters as the DOS based compiler, but through a simple, lightweight user interface. 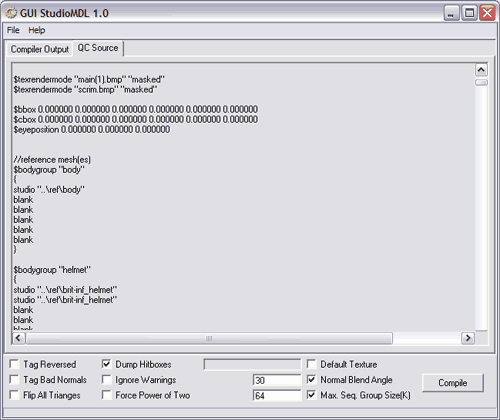 So why use it?

Well I cant force anyone to use it but it does save some of the hassle of starting a DOS window and typing long pathnames in! It does however give you the following:

Place GUIStudioMDL.exe in a location of your choosing, although I would recommend placing it in your Source SDK “bin” folder along with the rest of the SDK tools.

If you create a desktop short-cut to GUI StudioMDL you can drag QC files onto it and they will be automatically opened and loaded.

Run the installer and GUI StudioMDL will be installed for you. It will associate itself with QC files and create two shortcuts on your desktop – either one will start GUI StudioMDL or you can drag a QC file onto the icon to auto-load it. Draggingg a file onto the Auto Compile icon will open and compile the QC script for you.

GUIStudioMDL includes the default Half-Life SDK compiler. If your mod requires a different version, replace the compiler in the GUI StudioMDL install folder.

The output window doesnt show the output of studiomdl.exe until after the compile is done, so if its a large model your compiling you might not see anything for a while.