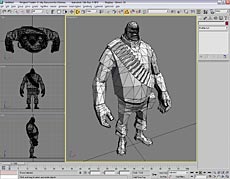 I made a small update to my SMD exporter plug-in to fix a bug in the batch mode that a user reported. While I was at it I used it as an opportunity to tidy a few bits of code up and port it to Max 2009 at the same time.

I’ve tested it with the 64-bit version of Max 2009 under Vista so I’m assuming it works under 32-bit fine. Naturally let me know if there’s are any problems.

Following on from yesterdays update of the VTF Shell extensions, I’ve now update my 3DS Max VTF plug-ins. These now support 7.3 and 7.4 VTF formats and I’ve included a 64-bit build. The Max 9 version should work in 3DS Max 2008 as well.

I’ve taken some time to do a small update to my 3D Studio Max SMD export plug-in and have nailed (I think) one bug and added a couple of user-requested features.

To start off the additions include support for exporting HL1 format unweighted SMD files. I underestimated how many people out there were using Max 9 and still modelling for Goldsrc games so per request I added the option to export files in the old format.

The second addition is a crude but useable “batch mode” which lets you configure and call the plug-in from Maxscript. One user had all their animations in one continuous sequence and was looking for a way to batch export them by specifying specific ranges. It’s fairly simple to use and I’ve included a basic example Maxscript in the ZIP file.

As for the bug, you may recall in previous blog posts that I was having considerable problems with Export Selected. After a lot of debugging and tracing I *think* I’ve nailed the problem. Certainly under the tests I’ve done you can now select part of a chain of bones and it will export and not lose position or destroy the animation. As always these things have a habit of blowing up in my face so I’ve retained the link to the old version of the exporter just in case people need to roll-back.

I’ve also marked this version as for 3D Studio Max 2008 too as users reported that it worked fine in both Max 9 and 2008 without problems.

I’m still getting e-mail/MSNs regarding problems with old Max 8 rigs that don’t work quite right with this exporter. In 99% of all cases it’s been simply been down to shoddy rig construction. I’ve said before and I’ll say it again, when you mirror part of your rig, reset the transforms before you use it! It really messes up the 3D transformation matrices and while the code tries to fix it, it’s not that clever. Oh and please, stop trying to use splines as bone nodes…

I’ve updated GUIStudioMDL2 and added better support from the new Orangebox SDK. Basically you can now configure it for both Source SDKs at the same time and switch between them at the flick of a switch.

It works pretty well, apart from the inherent bugs with the actual SDK compilers…

*edit* Oops. I farked up the link.

I’ve made a quick update to Jed’s Half-Life Model Viewer to try and resolve some problems with it running under Vista. To be honest, I didn’t realise people were still using it! I’ve re-compiled it in VS2005 and updated some of the libraries which seems to fix the problems. Give it a go and let me know if it’s still causing problems.

I’ve made another update to my 3DS Max 9 SMD exporter and have decided it’s robust enough to take out of beta and make version one-point-oh.

The changes I made weren’t significant but I did nail one irritating bug where it would crash if the diffuse texture on a mesh wasn’t of a Bitmap type. Once again Autodesk’s recommended 3DXI interface suffers an epic fail in blindly assuming the user has one.

Oh, I also removed the crappy “log to file” feature and replaced it with a proper combined progress/log dialog and compiled a version for the 64-bit edition of 3DS Max 9 as a few people asked for it.